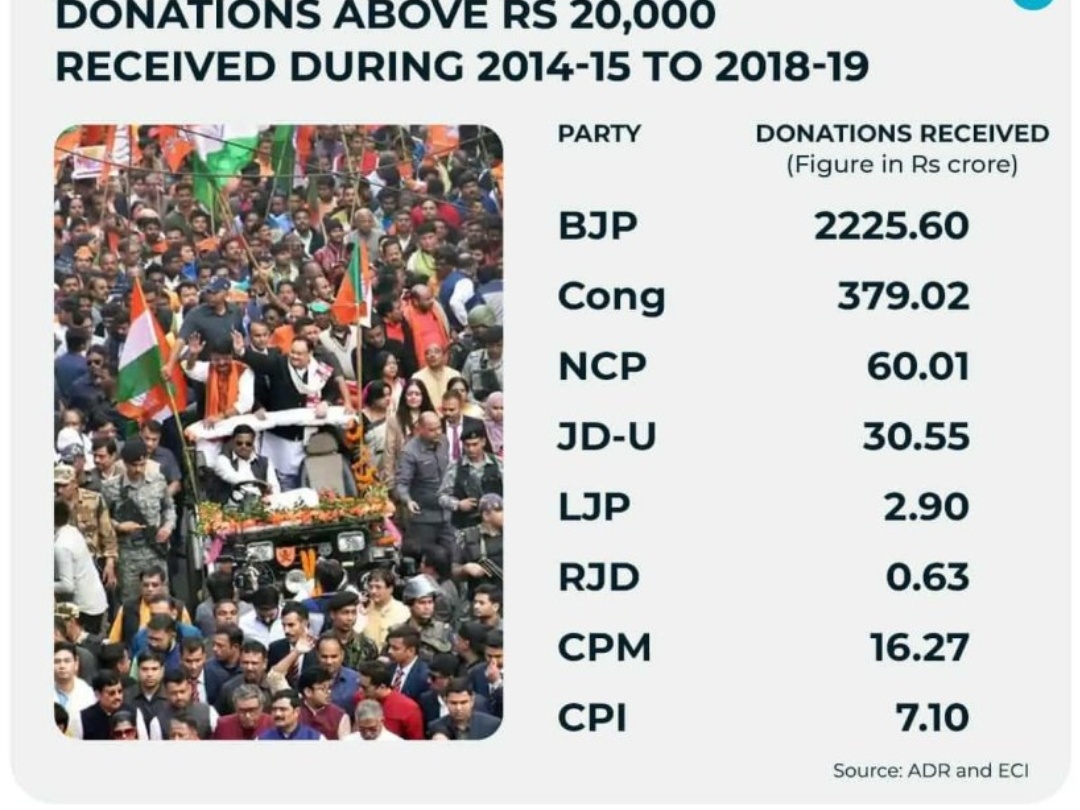 Transparency in political funding remains a paper tiger because ground realities reveal the rampant use of black money during elections in the country. The total donations above Rs 20,000 declared by 11 political parties in their contribution reports analysed by the Association for Democratic Rights a not-for-profit organisation that works for electoral and political reforms, between 2014-15 and 2018-19 was Rs 2777.97-crore. The ruling Bharatiya Janata Party (BJP) accounted for 80.12% of the total donations by collecting Rs 2225.66 crore, followed by its rival Congress at 13.64%, or Rs 379.02 crore, of the gross contributions.The latest ADR report cited that only three of the 11 mainstream parties analysed had submitted their reports of donations to the Election Commission of India (ECI) within the stipulated time frame. There were donations worth Rs 325.23 crore that were deposited without any Permanent Account Number (PAN), which is issued by the Income Tax (I-T) Department. The BJP accounted for the lion’s share of unaccounted source of donations at Rs 237.22 crore, or 72.94%, followed by the Congress (Rs 81.87 crore) and the Communist Party of India (CPI) (Rs 5.04-crore). The maximum number of instances of donations without or incorrect PAN numbers was reported in the assessment year of 2014-15, when Narendra Modi became the Prime Minister for the first time. There were also instances of undeclared donor names and addresses, missing mode of payment details etc. The Congress, the Bahujan Samaj Party (BSP) and the Nationalist Congress Party (NCP) are the only three political outfits that have submitted their contribution reports to the ECI within the stipulated time frame. Eight parties were found to have delayed their submission at least once during the five-year period. The BJP delayed the submission each year between 17 and 30 days, the ADR report pointed out. At least 71% of the income of national parties during the analysed period was from unknown sources, while the corresponding figure for regional parties was 58%, the ADR data showed. The income for all political parties for the 11-year period was estimated at Rs 11,367.34 crore, including national and regional outfits at Rs 9,278.30 crore and Rs 2,089.04 crore, respectively. Under section 29(1) of the Representation of the People Act, 1951, all political parties are required to report on contributions in excess of Rs 20,000 in a financial year and submit it to the ECI by September 30 in a bid to avail 100% tax exemption.