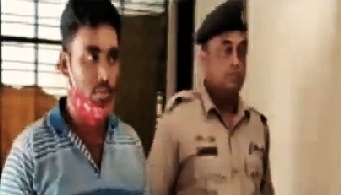 According to the incident report, On the 30th of September 2020, a married youth, Chiranjit Pal, raped a 14-year-old minor girl who had come to his house at around nine o’clock in the night in the rubber garden forest under Manubazar police station under Sabroom sub-division.

As soon as the minor reached the rubber plantation with a bowl of meat, he attacked her like a hyena and raped her.

Then he threatened to kill her if he told anyone about this incident. Later, the minor told the whole incident to her parents, after seven days, on October 6, 2020, the minor’s father filed a written case with the Manbazar police station.

Manubazar PS registered the case and arrested the accused Chiranjit Pal after taking up the case under POCSO Act and started investigation.

In the meantime, Sub Inspector Satya Ranjan Nandi, the investigating officer of Manu Bazar police station completed the investigation and submitted the charge sheet to the court, and the court accepted the testimony of 15 witnesses.

Finally Bilonia District and Sessions Judge Ashutosh Pandey convicted Chiranjit Pal and sentenced him to 20 years rigorous imprisonment under the POCSO Act, a fine of 20,000 rupees and six months imprisonment in default.

POCSO Act Special PP Prabhat Chandra Dutta handled the case for the government. Naturally, the minor’s family is happy with this verdict.

Court ordered a fine of twenty thousand rupees and six months imprisonment in default of payment.