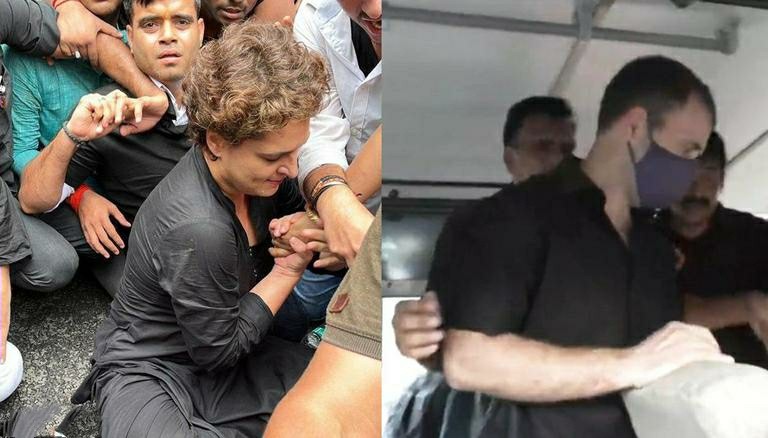 Congress stages protest across the country on Friday against the high inflation and unemployment.

Many big leaders of Congress, including Rahul Gandhi, went out to march to Rashtrapati Bhavan but were stopped on the way.

Many leaders including Rahul Gandhi have been detained.

Congress MPs took out a march from Parliament to Rashtrapati Bhavan to register their protest over inflation and unemployment.

Congress MP Rahul Gandhi also joined the march, although the march was stopped at Vijay Chowk and the MPs sat on a dharna there.

After this the police took many leaders including Rahul Gandhi and Priyanka Gandhi into custody.

Congress MPs dressed in black clothes raised slogans in the Well against rising prices and unemployment.

Rajya Sabha proceedings were adjourned as Congress members created ruckus over alleged misuse of investigative agencies by the government.

The party told in a statement that Congress Working Committee (CWC) members and senior leaders will take part in the “PM House Gherao”, while Lok Sabha and Rajya Sabha MPs from Parliament will participate in the “Chalo Rashtrapati Bhavan”.

The administration has imposed prohibitory orders to ban large gatherings in parts of Delhi ahead of the Congress march.

Citing restrictions, Delhi Police has refused permission to Congress to hold protests in the national capital.

Congress interim president and MP Sonia Gandhi led the protest of party MPs against inflation and unemployment in Parliament.

Congress MP Rajiv Shukla said that we are trying to march to Rashtrapati Bhavan but the police have stopped citing Section 144 of IPC. We will arrest all the MPs. We will give relief to the people from unemployment and inflation.

Congress leader Rahul Gandhi, while addressing a press conference in Delhi, said before starting a nationwide ruckus on inflation and unemployment, we are witnessing the death of democracy in the present era.

He said that whatever India had built with bricks and stones almost a century ago is being destroyed in front of your eyes.

He said that anyone who stands against the idea of ​​dictatorship is viciously attacked, imprisoned, arrested and beaten.

Congress General Secretary Priyanka Gandhi said that inflation has increased beyond the limit, the government will have to do something. We are agitating for this only.

Congress leader Salman Khurshid said that it is clear that we are fighting for the attacks on the people of this country. This fight is long and we will keep fighting. Unemployment and inflation are our issues.

Congress MP Pramod Tiwari said that Adani is becoming the richest (man) in the world and the country is getting poorer. I have come wearing black clothes so that they (government) should have good senses.