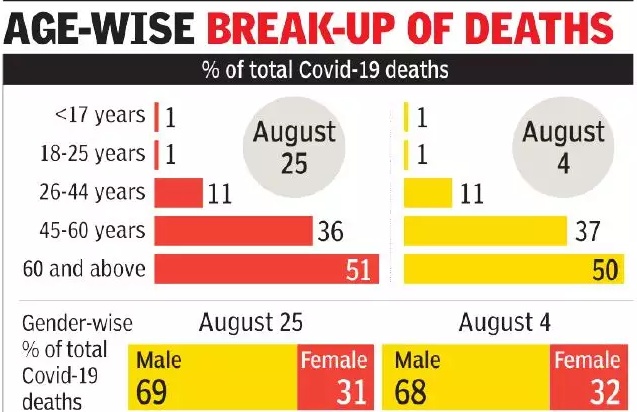 According to the government data till 25th August 69% of the covid victims in india are men. Among them 51% are above 60 years. 45-60 years are contributing 36%, as compared to 37% on Aug 4 and 32% on July 9. Just 1% of deaths were of people below 17 years, another 1% was among the 18-25 age group and 11% were aged between 26-44 age of group. In Italy and China deaths of men are more than double those of women. In New York City men constitute about 61% of patients who die Australia is shaping up to have similar result, though here it’s mostly in the 70-79 and 80-89 age groups. According to the scientists biological difference between men and women are one of the main reason in this matter. Men and Women differ in their sex chromosomes and the genes that lie on them. Women have two copies of a mid-sized chromosome (called the X). Men have only a single X chromosome and a small Y chromosome that contains few genes. One of these Y genes (SRY) directs the embryo to become male by kick-starting the development of testes in an XY embryo. The testes make male hormones and the hormones make the baby develop as a boy. In the absence of SRY an ovary forms and makes female hormones, which controls most of the obvious visible difference between men and women. A “toxic Y” could lose its regulation during aging. This might hasten ageing in men and render them more susceptible to the virus, belives scientists. Men are also disadvantaged by their low levels of estrogen  which protects women from many diseases, including heart disease. Till now all these matters are under scanner in the matter of men mortality higher than women in covid19.