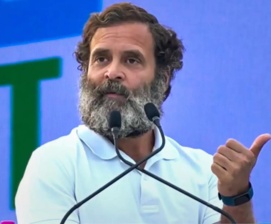 Bharat Jodo Yatra has reached Kashmir. During this, Congress MP Rahul Gandhi is raising many issues.

Gandhi, who reached Kashmir, talked about unemployment as well as Kashmiri Pandits.

Talking to reporters, Rahul Gandhi said, ‘We started this journey 4 months ago in Kanyakumari. We have learned a lot. We got to learn from the people of India. Farmers, laborers, small traders, children, women all put their issues before me. Small traders told about GST, COVID 19, what has happened and what should have happened”.

He said that millions of people have opened love shops in India. It is also visible on the streets everywhere.

Rahul Gandhi alleged that ‘democracy is under attack’. There are many big problems in the country. China took 2000 square kilometers of land from India on demonetisation. We tried to raise the issues in Parliament. As soon as we started speaking through our mike, the mike was switched off.

Rahul said that L-G is saying this to them (Kashmiri Pandits), they are begging? They said that they are demanding their rights and L-G should apologize to them.

Rahul Gandhi also raised questions on the Agniveer scheme. He said that earlier there was army, but recruitment in it has stopped. BJP has brought Agniveer scheme. They have not understood the army.