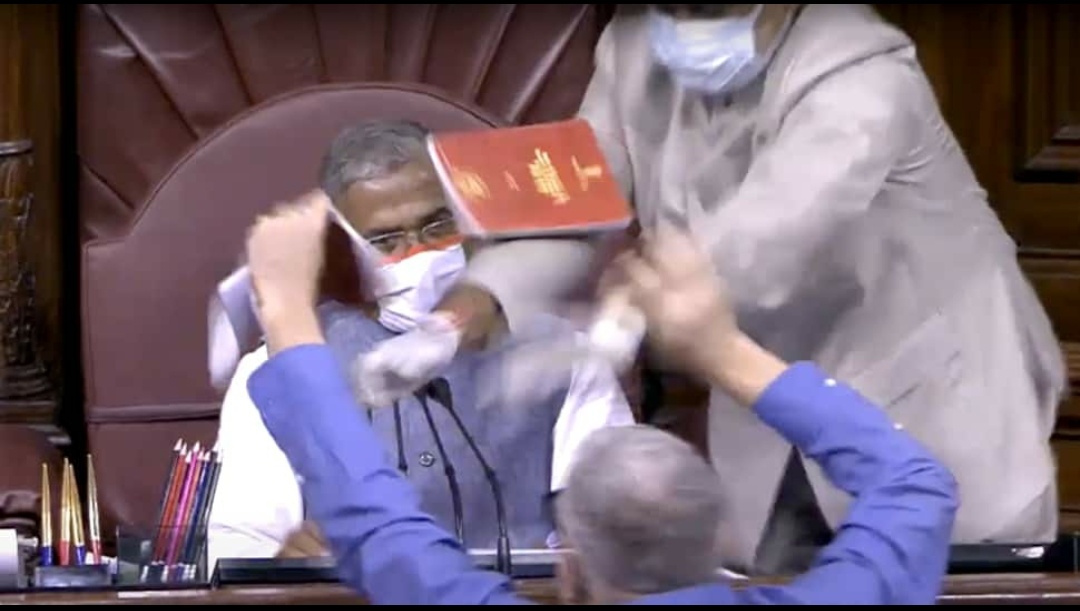 Farmers’ Produce Trade and Commerce (Promotion and Facilitation) Bill, 2020, and the Farmers (Empowerment and Protection) Agreement on Price Assurance and Farm Services Bill, 2020 passed amidst Opposition protests in upper house Rajya Sabha on Sunday. Deputy Chairman Harivansh rejects requests for voice vote saying that the demand cannot be made if the members are not in their seats as Opposition continues to protest in the well. Government put on mute the telecast of Rajya Sabha TV to pass these bills. “They have broken every rule of the Parliament. It was a historic day, in the worst sense of the word. They cut RSTV feed so the country couldn’t see. They censored RSTV” TMC MP Derek O’Brien said after uproar in the House on Farm Bills. On the other hand union Home minister Rajnath Singh said “a new history of growth and development in the agricultural sector will be written”. “Government is throwing the farmers at the mercy of co-operates. We are opposed to these bills,” said KK Ragesh, Communist Party of India (Marxist) Member of Parliament said protesting the bills. Congress MP K. C Venugopal said “This is very clear that this government’s motive is to destroy our farmers and help the corporate sector” Farm bills debate got dramatic as the opposition members rushed to the Well of the House and tore up the rule book and tried to snatch off the Deputy Chairman’s microphone. They were demanding that the bills be sent to a select committee for further discussion. Meanwhile Haryana-Punjab Border Sealed as Farmers Protest gearing up against these bills. Rss backed Bharatiya Kisan Union members burned effigy of PM Modi protesting centers’ these farm bills.