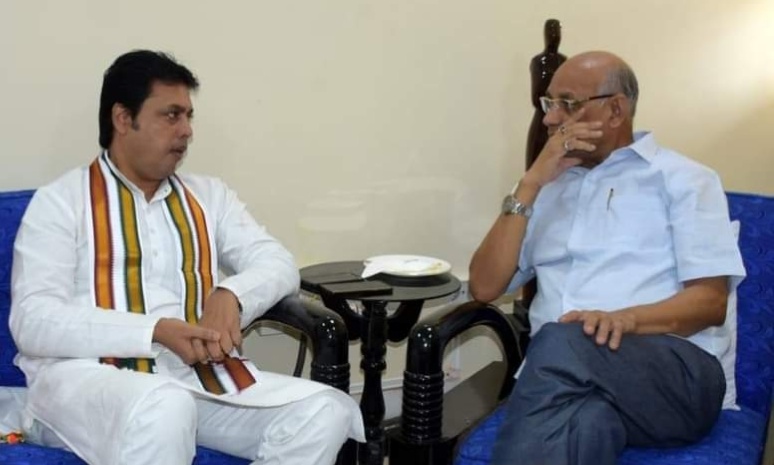 The long-awaited reshuffle in the state’s council of ministers is likely to come off within a few days, following a mandate given by the BJP’s central leadership including all India president J.P.Nadda during the chief minister’s recent visit to Delhi. Highly placed official sources said that the chief minister has already met the governor R.Baish and submitted a list of names for induction before flying away to Ambassa . Interestingly, the minister for social welfare and social education and sole representative of Chakma community in the cabinet, Santana Chakma has flown to Delhi yesterday after being reportedly summoned by the BJP’s central leadership. What this portends is not clear.
Official sources said that two sitting ministers are likely to be dropped off the cabinet to be replaced by six others to make the council of ministers full strength at twelve. Even though there is no confirmation of names to be inducted , sources said that names of Biswabandhu Sen , Bhagwan Das , Ram Prasad Paul, Rampada Jamatya, Atul Debbarma, Kalyani Roy , Mimi Majumder Das are currently doing the rounds for possible induction . One ministerial slot will be given to coalition partner IPFT that will choose the candidate so that the party’s understanding with the dominant partner BJP remains intact. It is being rumoured that Manoj Deb and Santana Chakma will be dropped from the council of ministers on ground of proven inefficiency.
Sources also said that there will be a reshuffle in the state assembly also in the posts of Speaker, deputy Speaker and chief whip. Who will be dropped and who will be inducted in the posts in state assembly is still not clear but changes are inevitable.