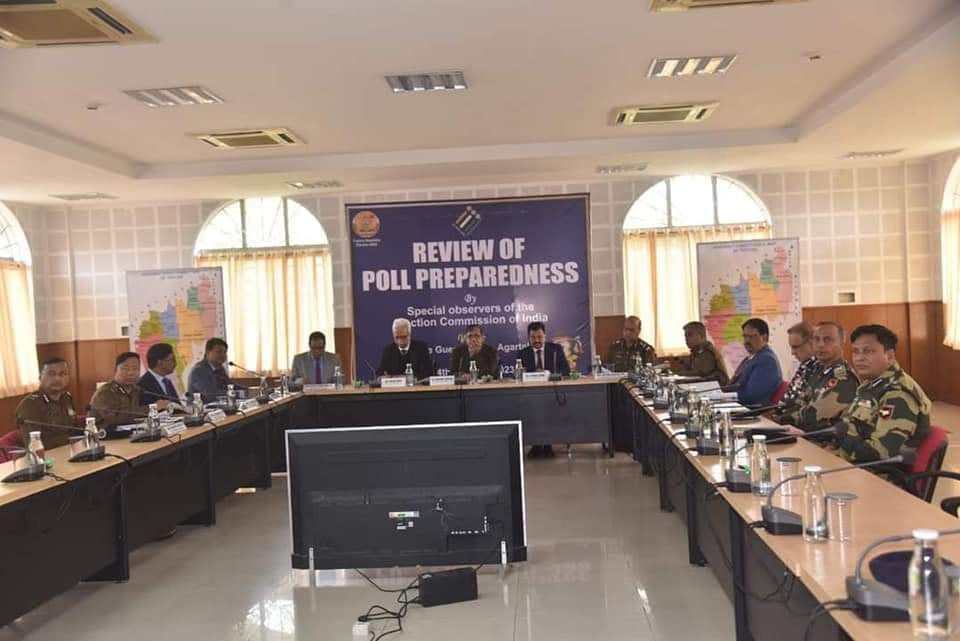 The assembly elections of Tripura, have been announced. The Election Commission has also started preparations for the upcoming elections.

On Monday, three special observers of the Election Commission arrived in Tripura to review the preparations and security arrangements for the elections in the three states.

On Tuesday they holds meeting with the officials and reviews the preparedness of the election.

The three observers Yogendra Tripathi, Vivek Johri and B Murali Kumar holds meeting in Agartala with the officials on Tuesday and take stock of the election preparations and other election-related issues.

According to the report they would have separate meetings with District Magistrates (DMs) and Superintendents of Police.

The special observers are to leave for Meghalaya, another poll-bound state, on January 27 as information gathered by The Tripurapost. The three officers will monitor individual cases.

So far around 200 companies of central paramilitary forces have arrived in Tripura and are engaged in confidence building measures across the state. “If required, more central forces will be deployed and now there is no dearth of forces to conduct free, fair and peaceful elections,” informed by a official.

“Police have been asked to take impartial action to ensure peace in Tripura,” sources informed regarding the Tuesday meeting.

Let us tell you that last week the Election Commission had ordered an inquiry into the attack on Congress bike rally in Majlispur assembly constituency of West Tripura district.

The action has been taken against a sub-divisional police officer and two officers-in-charge (OC) for failing to take appropriate steps during the attacks on the Congress bike rally.

The elections to the 60-member assembly in Tripura will be held on February 16 and the counting of votes will take place on March 2.