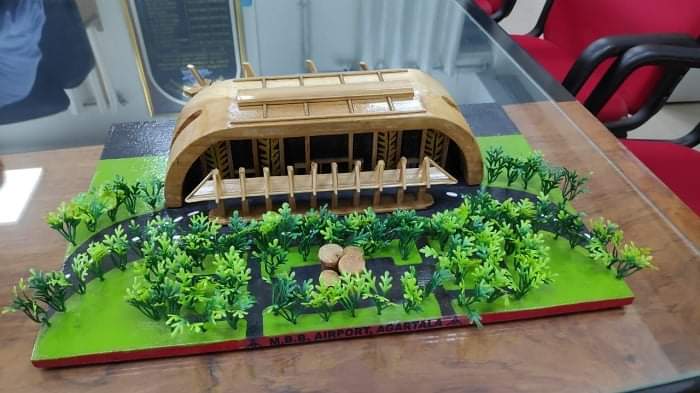 A new Integrated Terminal building is being constructed at Maharaja Bir Bikram Airport in Tripura as the existing terminal building was saturated with no further scope of expansion, according to AAI (Airports Authority India). The facility will be equipped with 20 check-in counters, four passenger boarding bridges, conveyor belts and modern facilities and amenities. It has been designed to process 1,000 domestic and 200 international passengers during peak hours, making the annual handling capacity three million passengers. Following the trend for Indian airports, the terminal will depict local art and heritage through its architecture. For example, a sweeping roof profile enveloping the entire terminal will take its form from the hilly terrain of the state of Tripura. AAI notes that it wanted to achieve a balanced mix of ecological infrastructure, art and building technology. This will manifest in features such as extensive use of bamboo – a widespread construction material in the area – which will be incorporated into the terminal in the form of jaali work, furniture and murals. Jaalis, a type of lattice screen, are a local feature, which can be seen in traditional households as well as in royal forts and palaces across the area. They help to restrict excessive solar radiation while permitting daylight ingress. The operator says that the planning approach for the terminal is based on optimizing airport procedures and passenger flow. AAI states that 90% of the project work is completed and the terminal is scheduled to be ready by the beginning of 2021.